Members of the NOW team recently attended a presentation by radical economist Kate Raworth at the Dartington Ways with Words and Ideas Festival. She was speaking about her new book ‘Doughnut Economics: Seven Ways to Think Like a 21st Century Economist.’

This post shares an interview with Kate, and analyses some of the key ideas shared in her book.

Apart from the unusual title, the first thing to strike you when you pick up Kate Raworth’s new book is the glowing review, on the front cover, from leading environmentalist and NOW contributor, George Monbiot, who compared his feelings on reading Kate’s book to the excitement that readers must have felt on opening John Maynard Keynes’ great work – A General Theory of Employment, Interest and Money – in 1936. This is high praise indeed.

The objective of Kate’s book is nothing less than to establish a sustainable economic compass. Her central argument is that, in the 21st century, the global economy must be re-purposed, not for indefinite growth, but to reach a safe and just space between the extremes of want and unsustainable consumption – the ‘doughnut’ as she calls it – where “the human rights of all” are met “within the means of a living planet”. In the context of the increasing disillusion with the traditional obsession with growth, this is a valuable message that many students of economics across the world will applaud.

Kate presents a new sustainable compass and a model of the economy, which credits production not only to the market and the state but also to the domestic household and to the commons, with each of these four domains being encompassed and supported by the living environment and societal norms.

She demolishes the assumption made by traditional economics that people make rational self-interested decisions based on monetary advantage, and uses a discussion of systems theory to point out that inequality and environmental destruction are not accidental by-products, of the current economic system, but in fact are integral, inevitable outputs of it.

Her presentation at the Ways with Words Festival was refreshing, inspiring, insightful, skilled and highly personal. It left us feeling that the praise her book is receiving was fully justified. Exceptionally for a speaker at a literary festival, she broke with the conventional structure of the event by inviting the whole audience to continue sharing ideas after lunch under a tree on the lawn outside. This was a break with the old model of “sages on stages”. It encouraged the audience to share their wisdom too, and Kate named the resulting discussion as the first “Dartington Fringe Festival” event. 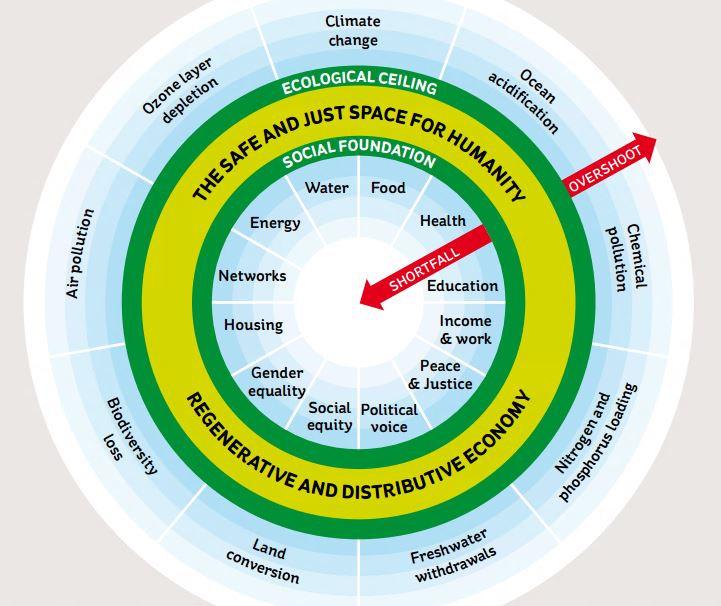 Doughnut Economics is altogether an excellent account of the pitfalls of conventional economics and the new thinking that may revolutionise it. We hope that, in the coming years, a new consensus will emerge that encompasses Kate’s thinking and also goes further.

Consequently, we would suggest that an acknowledgement of the human life cycle and what it means to be human must become central to the discipline of economics – for example, recognising the fact that we all come into this world helpless and that most of us need the help of others to a lesser or greater extent, throughout our lives, and especially as we near our life’s end. A full consideration of what is required to sustain this human input over the longer term – is an additional and necessary element that needs to be encompassed by the doughnut model.  An understanding of wellbeing in terms of what enables us to thrive surely needs to be included too.

As we see it, there are universal human needs and wants beyond basic human rights, and there is considerable evidence to that effect from positive psychology. So we would like to see a wider perspective on wellbeing not only implied, but fully included in Kate Raworth’s new economic perspective, by an examination of how wellbeing encompasses more than human rights and sustainable development goals.

Notwithstanding such a reservation, there is no doubt that George Monbiot and others are right to be excited by this major step forward in sustainable economic thinking which at last offers a compass towards prosperity within planetary limits.

The Network of Wellbeing (NOW) have shared a range of other blogs and videos on wellbeing and the economy, including: