Home / Blog / Our world / Putting Wellbeing at the Heart of Policy: Lessons from Bhutan and Ecuador

Putting Wellbeing at the Heart of Policy: Lessons from Bhutan and Ecuador 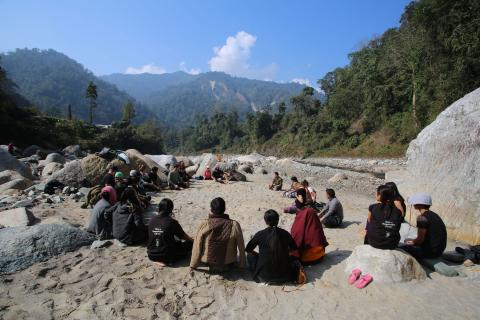 A commitment to wellbeing is central to the development strategies of both Bhutan and Ecuador, despite their very different cultures and histories, suggested presentations at a New Economics Foundation (NEF), seminar on alternative indicators on Friday 10th June. And a reverence for nature is a feature of both approaches.

Bhutan is famous for the adoption of Gross National Happiness (GNH), as an alternative to measuring societal progress through Gross Domestic Product (GDP). However, the concept has a deeper meaning than the use of the word “happiness” might imply in English, said Dr. Samdhu Chetri, Director of Bhutan’s Gross National Happiness Centre. He explained that the Bhutanese concept embodies a balance between material and spiritual wellbeing, with an emphasis on harmony with nature and living for a purpose.

Despite the similarities between the alternative approaches in Bhutan and Ecuador, the contexts in which the two policies have emerged couldn’t be more different. In Bhutan’s case, Dr Chetri stressed that GNH comes out of Buddhist tradition. It was proposed by a progressive, reforming monarch and has been implemented, alongside constitutional changes, in a very traditional revolution from above. In Ecuador’s case, Professor Radcliffe noted that, although the idea of “buen vivir” has links with traditional  practices, the reforms have been pursued by a rainbow coalition of trades unionists, womens’ groups, LBGTI activists, as well as indigenous people. They are deemed a revolution but a revolution that remains highly contested with powerful interests in Ecuadorian society opposing them all the way.

What’s clear from both cases, though, is that the designation of other measures of success besides GDP does have an impact on policy. Dr. Chetri recounted how consideration of Gross National Happiness and the indicators that have been established to measure it, was instrumental in persuading the Bhutanese Government not to pursue membership of the World Trade Organisation. Professor Radcliffe demonstrated how the “buen vivir” policy had led to significant investment in education, health, water, electricity and income transfers to the poorest sections of Ecuadorian society.

The impact in the future of both concepts will be closely watched. As Bhutan becomes more connected with the rest of the world, new opportunities arise that could lead to challenges to its Buddhist traditions. In Ecuador, falls in the price of oil have directly cut Government income.  An Embassy official at the event confirmed that the country remains deeply divided.

However policies in both Bhutan and Ecuador offer a ray of hope and perhaps an inspiration for others. Imagine how life might change in the UK if our Government put living well at the heart of its policy.

What do you think? Should wellbeing be placed more centrally at the heart of policy? Share your ideas and examples in the comments.