Home / Blog / Our world / What would you #InvestIn? Join the Happy City Campaign

What would you #InvestIn? Join the Happy City Campaign

Guest post by Happy City UK
on 20th November 2017
Happy City is a charity with a big mission: to ‘make what matters count’. It offers a place-based model of change that puts the wellbeing of current and future generations centre stage.

We’ve been in the happiness game for just over seven years now; talking to people about what matters to them, delivering practical training, and developing measures that allow us to see beyond GDP growth towards a society that benefits from true prosperity. This week I’m very excited we’re putting our activist foot forward with our new #InvestIn campaign.

One of the things that motivated us to start Happy City was the recognition that the economic system is broken; because it’s failing to deliver the very wellbeing and prosperity the vast majority of people want to see. As our friends at Action for Happiness found in their 2014 YouGov poll, people value happiness and wellbeing far above increasing financial wealth – at 87% and 8% retrospectively. 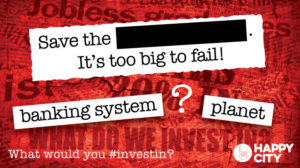 Economics is a simple idea really – it’s meant to organise production to meet our needs. That’s clearly not happening. Today’s economic system is skewed by an outmoded design which we now know produces things we certainly don’t want or need. It generates debt, waste, pollution, mental and physical ill-health and huge inequalities – all adding up to big failings in society for the vast majority.

Our #InvestIn campaign is shining a light on our needs and ways of meeting them. We’re not telling people what to think, but asking them to share their thinking. Speaking up, taking action, and inspiring others is a big part of the solution to a problem of this scale.

There’s strength in numbers, and while we’re a small team at Happy City, we’re proud to be part of a growing movement which sees wellbeing as the heartbeat of economic value. What’s truly exciting is to see rising waves of citizens who care, growing ideas about how to make the world a better place and pounding away at the defenses of those who fail to see we’re all connected.

As the government announced the autumn budget, together we sparked a debate on social media about what really matters, and what we should #InvestIn. 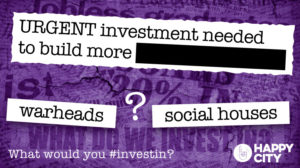 Read more about the campaign in our blog for Huffington Post.

On Budget Day, we helped the country talk about investing in real prosperity. We don’t want to be mere observers as those in charge patronise the nation with stale thinking. How we spend public money is not the be all and end all of achieving a happier society, but our elected representatives DO have a responsibility to invest our money in what matters to us, and to make sure the basic conditions are good for everyone to thrive.

And there are some top notch-investments to be made. Rather than talking about the ‘cost’ of education and training, how about recognising and celebrating the great investment this represents? Along with clean energy, green spaces, cooperatives, mental health and the resources for communities to thrive. These are the kind of investments that have a guaranteed return for all of us.

And this isn’t just a debate for budget day!

What do you think we should invest in? Together we can change the debate!